My first foray into public speaking was painful to say the least. I was so sure that I was going to fall flat on my face without notes that I did what many people do – I wrote something compelling, and I read it to my audience. What I quickly realized was that this is a recipe for disaster; if they wanted to read what I wrote, they would have done that. When you have something worthwhile to say, then say it, don’t read it.

What’s worse is that I was being asked to speak about topics that I was passionate about, and I wanted to pass this on to my audience. What I ended up doing instead was connecting my message to a boring (perhaps miserable) experience, and I accomplished precisely the opposite of what I set out to do. I was driving my audience away when I was hoping to win their hearts and minds.

In addition to the blank stares and nodding heads, the way that folks avoided me afterward was telling. There was no reason for them to engage my topic at a deeper level because the way that I presented it wasn’t engaging at all. The little feedback that I did receive from a few brave and honest souls was negative. I knew that something had to change, but I was comfortable reading what I wrote. The thought of having to move outside of my comfort zone was too much for me to bear, so I continued for a while with my old methods of preparation, and the results were the same every time.

I was driving my audience away when I was hoping to win their hearts and minds.

I started to wonder what it was that other, engaging, speakers were doing to connect with their audiences, and so I started to study them – TED Talk speakers, books, speeches on YouTube and any other source I could find. I parked my “teacher” hat and became a student. This was a long, difficult process, but it was worth every minute.

Here’s what I discovered from the experts:

With these tools in hand, I was equipped with a new approach to public speaking that was transformative, to say the least. While it took a little practice to master these skills (I’m actually always working to improve my use of them), it wasn’t long before something magical happened. People began to demonstrate their appreciation for my message and key points by seeking me out afterward to engage in conversation, to share how what I said impacted them and energized them about the topic.

Did you catch that last item? When folks are energized by what you have to say, you have successfully transferred your excitement to them in a profound way. It is certainly possible to change the hearts and minds of your audience, but this won’t ever happen if you decide to lecture them instead of engaging them in a meaningful way. 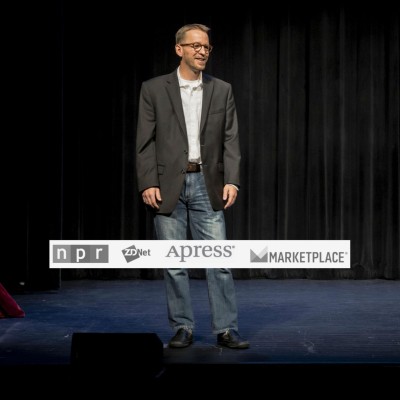 Peter Robichau
Peter Robichau is an author, speaker and consultant whose passion is pursuing excellence in all areas of life (business, family, leisure ... you name it). He has been featured on the air, online and in print in lots of familiar places like NPR, CIO Magazine, PC Magazine and PRI's Marketplace. You can find him online at robichau.com.

Know the Value of your Audience’s Time

The Myth of the Memorable Long-Form Speech